We live in a world where data availability grows exponentially every day. Never before have we had so many text documents to process. While data is a very powerful currency, having too much data available directly affects our capacity to consume it. As an old saying goes, “too much information kills information”. This issue is commonly known as data overloading.

Manually dealing with such a gigantic amount of information is an extremely overwhelming task, which implies having a huge amount of time and resources destined to it. Also, as new information sources keep piling up on a daily basis, keeping track of meaningful topics and key points seems almost impossible. Wouldn’t it be great to be able to extract all relevant information without having to read a never-ending list of documents? This is where Automatic Text Summarization (ATS) comes in handy 😉

Automatic summaries not only significantly reduce processing and reading time, but also help to efficiently discover relevant information and consume it faster. What’s more, when compared to human performance, automatic summary systems tend to be less biased. The aim of this post is to present a walkthrough of some state-of-the-art abstractive summarization techniques and understand their main challenges.

As mentioned before, Automatic Text Summarization (ATS) provides an effective way to solve data overloading. It is an NLP process that aims to reduce the amount of text of a given input while preserving its most essential information and contextual meaning. It focus on generating concise and readable summaries containing core information of an input text. Generally ATS is divided into two families of techniques: extractive and abstractive summarization.

Extractive summarization consists of selecting near exact sentences from the input text to create the final summary. It can be seen as a binary classifier whose goal is deciding whether or not to extract the sentence into the summary. These approaches are always consistent with the source document and do not modify the original text. Thus, these methods usually lack the ability to generate fluent and concise summaries.

Abstractive summarization on the other hand, aims to generate a completely paraphrased and concise summary from the input text, capturing its main idea, while being short and easy to read. By taking into account all the information given, abstractive summarizers generate new phrases to capture the document’s essence. We will focus on these models throughout the remainder of this post.

Abstractive Summarization is one of the most challenging tasks in NLP, as it involves understanding long segments, data compression and text generation. It can be formulated as a sequence-to-sequence task where the source text (input) is mapped to the target summary (output). Most recent approaches are based on Transformers, consisting of an encoder-decoder architecture.

How can we evaluate the performance of our models?

Evaluating summary quality is not a straightforward task. In the need of finding suitable automatic metrics to numerically qualify the faithfulness of a generated summary two types of metrics come into play: syntactic metrics based on n-grams such as ROUGE, and semantic metrics based on contextual embeddings such as BERTScore.

ROUGE (Recall-Oriented Understudy for Gisting Evaluation) is a standard set of evaluation metrics oftenly used for summarization tasks. It aims to evaluate the similarity between the model-generated summaries and the annotated summaries. ROUGE scores are branched into ROUGE-N, ROUGE-L and ROUGE-S scores.

Although ROUGE is a great evaluation metric, it comes with some drawbacks. In-particular, it does not take into account different words that have the same meaning — as it measures syntactical matches rather than semantics. It also fails to evaluate fluency, and so it performs badly in comparison to human evaluation. Let’s see this in more detail through some examples.

Suppose we have the following written phrase: “The quick black cat climbed into the old oak.”

And we want to evaluate it against similar generated sentences using ROUGE metrics.

Generated sentence 1: “The cat climbed into the oak.”

In this first scenario, ROUGE gives a good indication as the generated result is semantically accurate and achieves a high score.

In this second example, the machine-generated summary is factually correct but the ROUGE score is actually very low and thus it wrongly qualifies it as a mediocre summary.

In our last scenario we can see how ROUGE might wrongly give a high score to a generated summary that clearly is factually incorrect.

BERT Score is an automatic metric for text generation. Unlike existing popular methods (such as ROUGE) that compute token level syntactic similarity, BERTScore focuses on computing semantic similarity between tokens of candidate and reference sentences by incorporating contextual embeddings. The main idea underlying this approach is to first understand the meaning of the generated text and its corresponding reference, and then perform the comparison.

The method consists of passing both reference and candidate texts through a pre-trained BERT model, in order to generate contextual embeddings for each word. This is followed by a pairwise cosine-similarity calculation of each of the words from reference to each of the words in the candidate.

The idea of these metrics works fine on paper, but in reality it may be misleading as most times they fail to reflect the actual quality of the generated output. Human evaluation is still necessary in order to assess the model’s model’s true performance.

When it comes to short documents, state-of-the-art abstractive summarizers are usually based on a classical Transformer type architecture, combining encoder-decoder blocks with a self attention mechanism for text generation.

Transformer’s self-attention mechanism compares all the elements of an input sequence with each other, measures their similarity to obtain weights and combines these weights to give an output. Thus, the algorithm scales quadratically with respect to input size. If you want to get more familiarized with how Transformers work you can refer to our previous post for more detail.

Most common examples of abstractive summarizers include BART, PEGASUS and T5, among others. Architecturally these models are very much alike, what usually changes is the objectives used in pre-training. For instance, PEGASUS uses Gap Sentence Generation while BART uses text infilling and sentence permutation transformations.

We’ve chosen to use T5 to illustrate the performance of these types of models.

So far so good, by running the T5 model we were able to successfully capture the article’s main idea in just a few lines.

Now, think about the variety of text that we deal with on a daily basis, such as reports, surveys, articles, books, and so on. Most of them consist of longer documents that often have much more internal data variance and topic swings.Now, what happens if we have longer input texts? Can we still use the T5 model to summarize these long input texts? Well, actually due to quadratic self attention mechanisms, these types of models are limited to short sequences, usually up to 512 tokens.

A simplistic approach to address this shortcoming could be to split the input text in smaller text chunks. Is this effective? Chunking algorithms control how much of the larger document we pass into a summarizer based on the max tokens the model allows. Smaller chunks allow for more understanding per chunk but increase the risk of split contextual information.

Suppose we now want to summarize this piece, which has around 1200 words. To be able to process it, we’ve split the text into three chunks. The T5 model was run on each chunk and its outputs were then concatenated, reaching to the  following result:

We could also try to re-apply our model to the result in order to see if we can improve narrative and make the text more fluent.

Clearly this approach has not generated accurate results. Some contextual relationships are lost during the splitting. Also, it involves higher inference time as the model needs to be run several times.

Is there a better way to overcome the input length constraint? Fortunately YES 😎

In order to be able to process longer sequences, models such as LED or Long T5 have modified traditional transformer architecture with a self-attention operation that scales linearly with the sequence length. Both models use similar strategies; they are able to combine local attention with global attention by using applying the following techniques:

LED was introduced in the paper Longformer: The Long-Document Transformer. It introduces an attention mechanism that combines local windowed attention with task-motivated global attention.

LED’s Longformer can handle sequences 32 times larger than what was previously possible with traditional transformer self-attention. 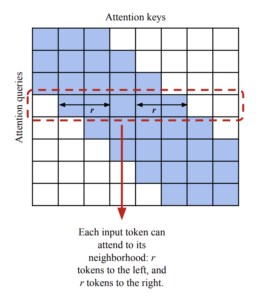 The following table compares LED and LongT5 in terms of input sizes and number of trainable parameters.

Let’s see these models in action shall we?

From the examples presented above we’ve derived the following observations:

When it comes to Large Language Models (LLMs), Generative Pre-trained Transformer 3 (GPT-3) is one of the first things that pops into our minds. It is one of the largest transformer models available leveraging deep learning to generate human-like text. GPT-3 has ~175B of parameters and has been trained with about 45 TB text data from multiple sources covering a vast variety of application fields. It can handle very long input sequences (up to 4096 tokens) and naturally manages large amounts of data variance.

In order to further evaluate Long T5 and LED performances, we’ve run the same example in the GPT-3 Playground and use this as our baseline.

From the result presented above, GPT-3 (text-da-vinci-003) clearly outperforms both Long T5 and LED approaches. But this is not really a fair comparison at all.  ​​Learning happens based on parameters. As the number of parameters increases, the model gains more granular knowledge and is able to improve its predictions. GPT-3 has in fact a thousand times more parameters than the LongT5 and LED versions we’ve tested.  So it sounds about right that it manages to achieve by far a better performance.

Certainly there is still a long way to go in terms of automatic text summarization when it comes to long documents. Here are some key takeaways:

I hope you’ve enjoyed this post. Keep tuned for more!