Over the last years recommender systems gained huge popularity in the machine learning and data science community due to their impact in digital and e-commerce platforms revenues by suggesting specific items to customers that would be interesting in them. Nevertheless, when building recommender systems a wide range of obstacles are encountered. To address those challenges, a large variety of tools are being developed to minimize the efforts invested when building these systems such as TensorFlow Recommenders, TorchRec, and NVIDIA-Merlin.

In this article we will make a deep dive into NVIDIA-Merlin, which is a state-of-the-art framework for building recommender systems at scale as it promises to address the different challenges arising from recommender systems workflows. We will summarize important tips that will be useful when assessing its suitability for a project or when starting to work with it.

One of the biggest issues digital companies are facing nowadays is the engagement of users in their platforms, which translates into increased profits. Questions like: how do we get our Youtube users to click on ‘What’s next’ one after another for a long period of time? Or how do we give a specific Netflix user a “What is recommended for you” suggestion that will help retain them for a bit longer? Even if you have an online fashion store: how do we help our customers find their products in an easier way? “You might also like…” or “Frequently bought together” help solve this issue.

All of the aforementioned examples are possible thanks to recommender systems.

Recommender systems boost business revenue by helping customers find the desired items and buy the most suitable ones for them with less effort.

Some illustrative examples of how recommender systems are impacting on digital platforms and e-commerce are:

On the other hand, personalized recommendation systems aim to recommend in a “customized” way finding mainly three types of filtering: collaborative, content-based and hybrid ones, which take the advantages of both systems.

For example, in Fig. 1 it can be seen that if a User A and a User B both liked the same two movies, the system will recommend to user B a third movie liked by user A.

For example, if a user liked a movie A then a movie B with similar features to movie A will be recommended to the user. 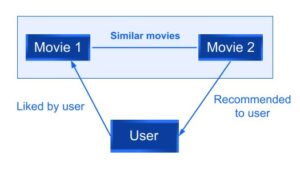 For example, Netflix makes use of this approach by first comparing what is watched by similar users (collaborative-based filtering) and secondly by recommending movies with similar features to the ones highly rated by the user (content-based filtering).

In this section we will be discussing how to cope with the obstacles encountered at each step of the workflow when building a recommender system from the beginning until it is ready for customers in production.

1. Getting the data and preparing it for training

Data from users and items interactions come from reviews, likes or even clicks in a website, and are usually stored in datawarehouses or datalakes. These pieces of data are then used to train the recommender systems. The main objective of the ETL (Extract, Transform and Load) process is to prepare the dataset for the training part which usually comes in a tabular format that can even reach a Terabyte scale which means there is a lot of data to process in the feature engineering (i.e. creating new features from existing ones) and preprocessing parts.

For example, if your online fashion store would like to make use of a mailing list in order to send personalized recommendations once a month, you will first have to collect every user interaction inside your website (e.g. which items did the user like, previous reviews made), cleaning the data (e.g. unmeaningful reviews) and select the features that will be used while also creating new ones (e.g. an average user rates can be useful).

Many challenges arise from this step:

The training step is usually performed by choosing one of the available frameworks (such as Pytorch, Tensorflow or Huge CTR which is a NVIDIA Merlin library that will be discussed later on), evaluated and then ready to move on to production. Some of the challenges that arise in this step are:

3. Deployment and refinement of the recommender system

By contrast, if you want your online store to make use of a mailing list to recommend personalized products for each user once a month you will just be performing the inference step before sending the emails. This consist of a non real-time scenario.

A wide variety of barriers appear when recommender systems are in the scene. So, in order to make data scientists and machine learning developers’ lives simpler (or at least, try to) new tools and frameworks start being developed in order to support this recommendation engine: TensorFlow Recommenders (a library developed by Google researchers), TorchRec (a PyTorch domain library) and Nvidia-Merlin (a framework developed by NVIDIA) are some of them.

From now on this first article will focus on NVIDIA-Merlin which was launched in 2020 and promise to address some of the challenges mentioned above.

The following diagram in Fig. 3 shows the main features for which NVIDIA Merlin was developed and how it orchestrates the whole recommendation system. Having this big picture of the process we are then able to jump to each of the libraries designed for this purpose. 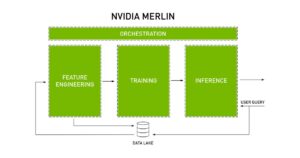 Fig. 4: NVIDIA Merlin orchestration of the main features of a recommendation system [6]

NVIDIA Merlin provides multiple components so a single library or multiple of them can be used to accelerate the entire recommender pipeline: from ingesting, training, inference, to deploying to production.

Depending on the problem you are trying to solve the components of NVIDIA Merlin being used may vary.

The three main libraries that are designed to work together are:

There are also some other Merlin libraries designed to address some specific challenges: 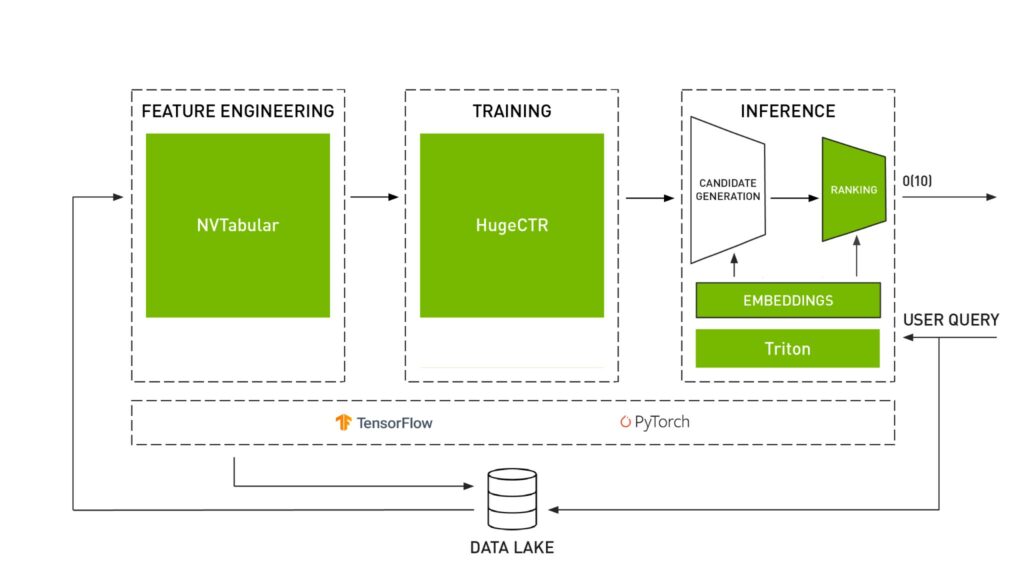 An advice before following: Fig. 4 shows how Merlin is built on Tensorflow and Pytorch. Nevertheless, before following you should be aware that for most of the components, the Pytorch API is initiated but incomplete at the time of publishing this article. So, for example, if in your present project you need to use Merlin Models you will not be able to build it on Pytorch yet.

In addition to these libraries NVIDIA Merlin takes advantage of NVIDIA AI already developed software available in their platform. It is relevant to mention NVIDIA Triton Inference Server which aims to achieve a high-performing inference at scale in production. This is achieved ‘by running the inference efficiently on GPUs by maximizing throughput with the right combination of latency and GPU utilization’, as it is described in official NVIDIA documentation.

A special scenario comes when you want to predict next user’s interests but you have no prior information about them. This is useful considering user’s interests may change over time or even when users decide to browse in private mode. So, just gathering the information from the current session can help to solve these issues.

An example of this is presented in the official documentation provided by NVIDIA aiming to recommend next user items from the current session interactions.

In this section the main steps and libraries used to achieve this goal are described (you can follow along the code for further reading in [5],[6]).

1st NVTabular: used to define the workflow to preprocess the data by grouping the interactions from the same session, sorting them by time.

2nd Transformers4Rec: this library allows you to make use of the transformer architecture which is imported from the Hugging Face Transformers NLP library in order to do the training. This library also includes Recsys metrics that allow you to measure how well your model is performing.

3rd Triton Inference server: this library allows to deploy and serve the model for inference. The deployment from both is achieved: the ETL workflow (since in the inference you will need to transform the input data as done during training) and the trained model. As a result now your users can query the server obtaining the next item predictions.

Not a magical solution…

After reading NVIDIA’s official documentation we decided to put some hands-on and try some libraries by ourselves. NVTabular and Merlin Models were the main components addressed finding out some key aspects to have in mind before deciding to move on with this tool.

Merlin Models, NVTabular and Merlin Systems are components of Merlin that are designed to work together. NVTabular will output (in addition to the preprocessed parquet files), a schema file describing the dataset structures that is needed to feed Merlin Models. Then, the ensemble with Merlin models must be done in order to get the model inference pipeline. The final step would be to deploy the NV-Tabular workflows and models to Triton Inference server.

This designed integration between libraries makes it straightforward to build end-to-end RecSys pipelines but in terms of flexibility if deciding to move on another technology can be difficult.

The simplest way to use Merlin is by running a docker container that can be found in https://catalog.ngc.nvidia.com/containers, in order to avoid libraries-dependencies issues.  We decided to run it on an AWS instance g4dn.xlarge which provides a single GPU, 4 vCPU and a 16GiB memory size. Using this type of instance costs USD 243  per month (calculated using AWS calculator). The project you will embark on will set your own infrastructure costs which will be different to this one but for sure needed to be considered before moving on.

As it was already mentioned before, we discovered from the official NVIDIA documentation the following advice: “In our initial releases, Merlin Models features a Tensorflow API. The PyTorch API is initiated, but incomplete”.

So, first thing to be aware of: despite some specific components (as for Transformers4rec) NVIDIA-Merlin is designed to be integrated with Tensorflow.

In this article we first discussed the impact of recommender systems in today’s digital platforms and the different types of filterings. Then we moved on to understand the main challenges that arise from recommenders and the need of tools that support every step of the workflow process. Finally we introduced and discussed NVIDIA Merlin, a promising framework for building end-to-end recommender systems which can be useful to speed up the preprocessing and feature engineering using NV Tabular but is not as flexible (up to now) to be used for a whole recommender system built on Pytorch. We also discussed session-based recommenders which are particularly useful when no prior user interactions are found.

At Marvik we are always searching for state-of-the-art technologies in order to solve complex problems. Feel free to contact us at [email protected]i if you have any questions or want to share some ideas.

[1]  I. MacKenzie, C. Meyer, S. Noble (2013, October 1). “How retailers can keep up with consumers”. https://www.mckinsey.com/industries/retail/our-insights/how-retailers-can-keep-up-with-consumers